Châteauneuf-du-Pape (pronounced “shat-toe-nouf due pap”) is often described as “a gateway drug to French wines.” This renowned wine is named after the region in France where it is made, in the Rhone Valley.

This January, Picnic owner Liz Ahearn visited France and, of course, made several stops at wineries during her travels. On her third day in France, Liz stopped at Domaine Du Grand Tinel, a family-owned winery in CdP. 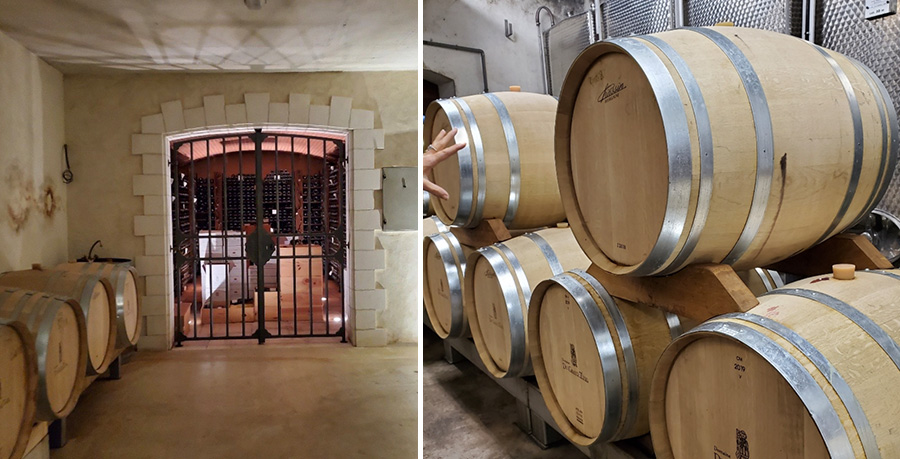 The winery began as a partnership between two established and respected wine families in the area: the Establets, who had been in the wine business since the 1700s, and the Jeunes, whose patriarch Lucien Jeunes was not only a wine owner and transporter but also the mayor of Châteauneuf-du-Pape for 25 years. In the 1960’s, the two estates became one when Christiane Establet and Pierre Elie Jeune married. Their children—Béatrice, Isabelle, and Christophe—now run the estate, and it was Béatrice who gave our Liz a tour of Domaine Du Grand Tinel on a rainy day in January.

Besides their reputation as exquisite winemakers, the family is known for their colorful lineage. In 1954, their grandfather Lucien issued an unusual decree for the region of Châteauneuf-du-Pape: “Any aircraft, known as flying saucer or flying cigar, which should land on the territory of the community will be immediately held in custody.”

Lucien’s decree came on the heels of a reported extraterrestrial sighting in northern France. More recently, Lucien’s son Pierre Elie told reporters. “At that time, people were talking a lot about extraterrestrials and the unknown, it was in fashion, and there were loads of stories circulating. He wanted to make a bit of an advertisement for Châteauneuf. It was an excellent publicity stunt… and free.”

Lucien’s alien law is still on the books, and perhaps for good reason: during their visit Béatrice told Liz that before her grandfather’s decree, it was common for planes to fly over the wine fields, and the family was concerned with how resulting fumes might affect their wine. For now, Châteauneuf-du-Pape is protected from the effects of air pollution…and extraterrestrials.