To celebrate Women’s History Month we’ve asked the wonderful women of Picnic Wine & Provisions to share the stories of the female heroes who have inspired them the most.  When you come into Picnic this month we’d love to hear the stories and women who have inspired you or share more about these women below and what makes their stories so special to us.  Happy Women’s History Month!

Gertrude Stein (1874-1946) was an American writer and art collector and a central figure in the Parisian art world. She helped launch the careers of famous artists and writers such as Juan Gris, Pablo Picasso, Henri Matisse, Ernest Hemmingway, and F. Scott Fitzgerald. Her home in Paris who she shared with partner Alice B. Toklas became a salon where artists of all kinds would come to work and collaborate. Imagine being a fly on that wall! As an advocate of the avant-garde, she helped shape an artistic movement that broke with the past. What the artists of the time were achieving in visual arts, she strove to achieve in her writing. She rejected linear time-oriented writing for spatial- process oriented literature. Her writings were often dense poems void of plot or dialogue.

“A Carafe, that is a Blind Glass”

A kind in glass and a cousin, a spectacle and nothing strange a single hurt color and an arrangement in a system to pointing. All this and not ordinary, not unordered in not resembling. The difference is spreading.”

W.G. Rogers wrote, “Tender Buttons is to writing…exactly, what cubism is to art.”  If you have seen Midnight in Paris, Kathy Bates played Gertrude Stein. She certainly was an influential woman who helped shape not only a generation of artists, but a movement.

I first encountered the mesmerizing music of Lili Boulanger (1893-1918) when I was studying for my Master’s Degree in Opera Performance and Vocal Pedagogy. I couldn’t believe that such a young woman could write such complex and amazing music. She was 19 when she became the first woman to win the composition prize in the Prix de Rome, a very prestigious competition in Europe. Her sister Nadia, also a composer, became more famous; but in my opinion, did not create such music as Lili.

Throughout her life she was quite sickly. She would compose at her piano right next to her bed or listen to Nadia play her compositions while she rested. She died at the age of 24 of tuberculosis. 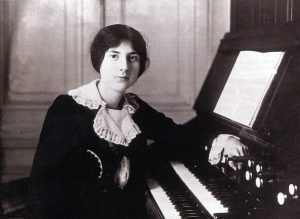 I studied and based my Master’s Thesis on one of her vocal works called Clairières dans le Ciel (Clearings in the Sky), a work of 13 pieces in French about a person caught in unrequited love. It’s mysterious, joyful, tumultuous, dramatic and depressing all at once. It is reminiscent of Debussy and Fauré and also makes one think of the paintings of Monet, Renoir or even Van Gogh. Her music perfectly pairs with a bottle of Picnic’s Andre Dezat & Fils Pouilly Fume or if you prefer red, Jaboulet Saint Joseph 2016 – both currently in the store.

To hear some of her songs from Clairières dans le Ciel performed on my Master’s Recital, click here. 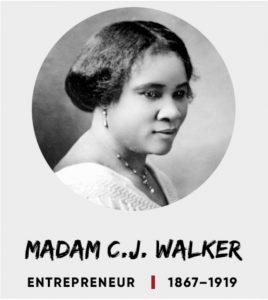 Madam C.J. Walker (1867-1919) was one of the first American women to become a self-made millionaire. Born Sarah Breedlove to parents who had been enslaved, she was the first in her family to be born free after the Emancipation Proclamation. Her early life was marked by hardship; she was orphaned at six, married at fourteen, became a mother at 16 and a widow at twenty.

She was inspired to create haircare products after a scalp disorder caused her to lose much of her own hair. Using her business acumen and knack for self-promotion, she built a business empire and forever changed the Black hair care industry, at first selling products door to door, giving demos and lectures town to town, and eventually opening a manufacturing warehouse and employing “beauty culturalists” to sell her wares. 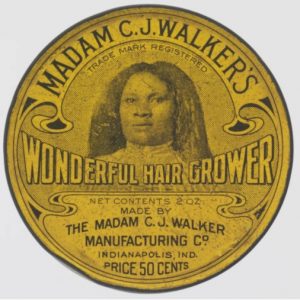 Walker’s reputation as an entrepreneur was matched only by her reputation for philanthropy. A relentless innovator, Walker organized clubs and conventions for her representatives, which recognized not only successful sales, but also philanthropic and educational efforts. She promoted female talent at a time when jobs for women were limited, especially for black women. She even stipulated in her company’s charter that only a woman could serve as president. She donated generously and founded philanthropies that included educational scholarships and donations to homes for the elderly, the NAACP, and the National Conference on Lynching, among other organizations focused on improving the lives of African Americans.

The Walker Building, an arts center that Walker had begun before her death in 1919, was opened in Indianapolis in 1927. An important African American cultural center for decades, it is now a registered National Historic Landmark. A line of cosmetics and hair-care products bearing the name Madam C.J. Walker Beauty Culture is still available at Sephora retailers. In 1998, the United States Postal Service issued a stamp of Walker as part of its “Black Heritage” series. She is remembered as a pioneering Black female entrepreneur who inspired many with her financial independence, business acumen and philanthropy. Walker’s life was portrayed in the 2020 TV show Self Made, with Octavia Spencer portraying Walker.