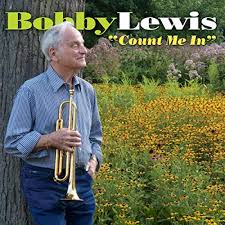 Born in Oshkosh Wisconsin, Bobby Lewis moved to Chicago in 1961 and has been a fixture on the Chicago jazz scene ever since.  There’s little Lewis hasn’t done in his 75 years of playing the trumpet.  In addition to 13 studio albums, his performance credits include playing alongside Tony Bennett, Peggy Lee, Ella Fitzgerald, Frank Sinatra, Sammy Davis Jr., and Judy Garland.  In fact, there’s a good chance you’ve heard his silky playing without even knowing it; Lewis has done over 7500 recording sessions, including commercial jingles for Old Style Beer, State Farm Insurance, Pillsbury, and many, many others.

Today we invite you to join us for another Virtual Jazz Brunch by listening to Lewis’ most recent album, Count Me In from 2018.  The album includes classics like “Autumn Nocturne,” “Look for the Silver Lining” (an old popular tune most famously recorded by Judy Garland), and “Snowfall” (a lovely subdued tune perfect for the coming snowy weather – its main melody has just 37 notes!)  In addition, Lewis contributes five original compositions, which prove that he has composition chops to match his stellar playing.

Lewis’ beautifully smooth and thoughtful playing is the perfect sound to settle in with on a cold winter’s day.  His sound, which he describes as a “warm cool,” is the perfect companion for cozying up by the fireplace with a warm cup of coffee, hot chocolate, or tea.  He likens his playing to the human voice, “rather than a brassy instrument that can blow the walls down.”

At 85, Lewis shows little signs of slowing down; he continues to play every day because he loves it.  “It’s nice to keep creating.  I just want to keep my mind going.  I practice every day, just because I love to play the trumpet.  I’ve got them sitting out.  I just walk by and play them for a while.  That’s the fun I have in my life.”  And we have fun hearing him.

Listen to Bobby Lewis’ album, Count Me In, on Spotify.
Check out two different recordings of “Look for the Silver Lining,” recorded by two of his most famous collaborators: Judy Garland and Tony Bennett.
For news about upcoming performances, interviews, and information about his other studio albums, check out his webpage: www.bobbylewis.com.