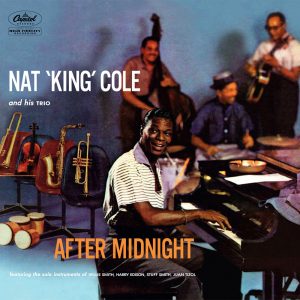 For our first two installments we’ve featured instrumentalists, so today we’ll feature one of the most memorable voices in 20th century jazz and pop music, Nat King Cole.

Although born in Montgomery Alabama, Cole’s family moved to Chicago when he was a young boy, ultimately settling in the Bronzeville neighborhood.   Cole attended the same high school that later, famous singer Sam Cooke would attend.  As a young boy he recalls sneaking out of the house to sit outside jazz clubs to hear Louis Armstrong and other famous jazz musicians.  Cole had his start studying classical piano, playing the music of Bach and Rachmaninoff before starting a jazz ensemble with his older brother Eddie, a bassist.

He spent his teens performing in Chicago jazz clubs where he found his nickname, “King,” a reference to the nursery rhyme “Old King Cole.”  The name stuck and his group became known as the King Cole Swingsters before being rebranded the King Cole Trio.  At this point in his career he was still known only as a pianist, he didn’t start singing until a drunken bar patron demanded a song, and once the world heard his voice, more and more patrons began to request songs.  The song he sang that first night was “Sweet Lorraine,” which was recorded in 1940 and became one of the King Cole Trio’s first major hits.

In the 40s and 50s, King found national and international success.  Including becoming the first African-American recording artist to have a radio show, the fifteen minute program called King Cole Trio Time, and in 1956, became the first African-American to host a television show with the debut of the The Nat King Cole Show on NBC.  Unfortunately, the Nat King Cole Show struggled to find sponsors who would support a black entertainer, and the show was canceled a year later.

This is only one example of how racial dynamics and tension affected Cole’s career.  He often experienced racism while touring across the south, the most notable incident coming in 1956 when he was assaulted during a concert in Birmingham Alabama.  Early in his career, Cole saw himself as an entertainer—not an activist—a position which put him at odds with prominent members of the early civil rights movement.  He later reaffirmed his commitment to opposing segregation by joining a larger coalition of entertainers boycotting segregated venues.  He contributed money to the Montgomery Bus Boycott and helped to plan the 1963 March on Washington.

It’s hard to pick just one of Nat King Cole’s 38 studio albums to feature today, but you can’t go wrong with After Midnight, recorded in 1957.  It strikes a great balance between Cole’s jazzy beginnings and later success in the pop realms.  It features jazz standards like “Caravan,” next to jazzy renditions of pop tunes that will make you want to get up and dance like “(Get Your Kicks) on Route 66,” and “Candy,” and of course smooth ballads that will have you falling in love with Nat King Cole’s velvety voice all over again.

Listen to Nat King Cole’s album, After Midnight on Spotify.
This album contains a re-recording of the tune, “Sweet Lorraine” that was one of the King Cole Trio’s early hits, listen to the original version here.

We Love Our Community Partners!

At Picnic, we are leaning

Picnic is known for our