Welcome back to our virtual jazz brunch series, where we help bring great jazz music to your living room.  So far this blog has explored current and historic names from the Chicago jazz scene, but today we’re going to take a brief visit to New York City to profile Charles Mingus, one of the most accomplished and storied bass players ever.  Mingus is famed for his talent as a performer as well as his genius as a composer and bandleader; his career also boasts some of the most unbelievable and entertaining anecdotes.  There’s no better introduction to his music than through his iconic album, Mingus Ah Um. 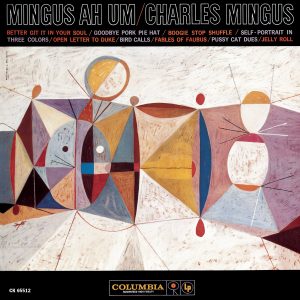 Mingus was born in Arizona but raised in the Watts neighborhood of Los Angeles to a multi-cultural family; in his autobiography, his mother is described as “the daughter of an English/Chinese man and a South-American woman”, and his father as the son “of a black farm worker and a Swedish woman.”  Despite his poor upbringing and education, Mingus was drawn to music from a young age, especially the music of Duke Ellington and the gospel music at church.  He played the trombone and the cello, but his inability to read sheet music stunted his early musical experiences.

Listening to this album, you’d have no idea of these early struggles with music.  This album is a compositional tour de force that shows off both technical versatility and a touching artistic sentimentality.  His music is new, but strongly rooted in the past, paying tribute to important jazz ancestors and his own musical influences.  All of the songs on this album are original Mingus compositions except for “Girl of My Dreams,” written by Sonny Clapp.

This is immediately evident in the gospel feel of the very first song on the album, “Better Git It in Your Soul.”  Even without lyrics it’s easy to imagine a full choir belting out the high notes at the end of a bright and joyful Sunday service.  In “Goodbye Pork Pie Hat,” “Open Letter to Duke,” and “Jelly Roll,” Mingus pays tribute to jazz greats Lester Young (known for often donning a pork pie hat), Duke Ellington, and early jazz pianist Jelly Roll Morton.  Many thought that “Bird Calls” was written as a tribute to Charlie “Bird” Parker, but Mingus later dispelled these rumors, saying that the virtuosic saxophone licks were not meant to sound like Parker, but instead like actual birds.

The musical centerpiece of this album is the song “Fables of Faubus,” named for Orval Faubus, the governor of Arkansas who in 1957 used the National Guard to prevent the integration of schools in Little Rock.  The song had accompanying lyrics, but Columbia Records refused to allow them for the 1960 release of the album, so an instrumental version was recorded instead.  The lyrics begin with a poignant chorus before continuing into a shouted call-and-response.  Critic Don Heckman commented on the song in 1962, calling it “a classic Negro put-down in which satire becomes a deadly rapier-thrust. Faubus emerges in a glare of ridicule as a mock villain whom no-one really takes seriously. This kind of commentary, brimful of feeling, bitingly direct and harshly satiric, appears far too rarely in jazz.”  Even in this instrumental version you can almost hear the powerful words in the chorus every time it returns.

Name me someone who’s ridiculous, Dannie.
Governor Faubus!
Why is he so sick and ridiculous?
He won’t permit integrated schools.

Name me a handful that’s ridiculous, Dannie Richmond.
Faubus, Rockefeller, Eisenhower.
Why are they so sick and ridiculous?

If you’re curious about the peculiar title of this album, the “Ah” and “Um” are not verbal tics, but a pun based on Latin grammar. If we pretend Mingus is an imaginary Latin word, using the common Latin suffix -us, the other transformations of the word would be Minga and Mingum. Like Latin students, who often practice by repeating a base word followed just by the suffix alterations, Mingus, Minga, Mingum becomes “Mingus, ah, um.”  This is possibly yet another way that Mingus sought to connect his album to much older roots. 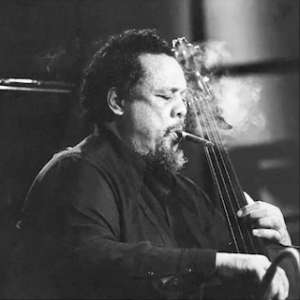 No account of Charles Mingus is complete without discussing his volatile temperament and antics both on and off stage.  A large and physically imposing figure, Mingus was known for having a violent temper which occasionally caused altercations between himself, other band members, and at times even the audience.  He had an impeccable vision for what he wanted, hailed as an “organizational genius” by Dizzy Gilespie, who also claimed that he reminded him of a young Duke Ellington.  But, when things didn’t go his way, he wasn’t afraid to express his displeasure.  Perhaps the most famous example is the time he destroyed a $20,000 bass on stage in New York City after being heckled by the audience.

We’ll close today’s post with my personal favorite story about Charles Mingus: the story of him and his cat named ‘Nightlife.’  For a figure who was sometimes referred to as “The Angry Man of Jazz,” it might seem surprising that Mingus had a soft side for his beloved feline companion.  But, fearless bandleader that he was, he was determined to maintain a certain level of control of his household.  The idea that Nightlife would do his business in a sandy cardboard box in the corner of his living room was unacceptable and unsophisticated, so Mingus decided to design an alternative.  With much of the same precision and attention to detail that he gave to his jazz compositions, Mingus devised and even published a brochure on how to toilet train your cat (he called it the CAT-alog).  Afterwards he saw no reason not to monetize the venture, often trying to sell it to patrons and fellow musicians between or after late night sets.  So after you listen to Mingus Ah Um this morning, imagine Charlie Mingus stepping off the stage, walking up to the bar and sitting down next to you as he asks you, “are you tired of scooping cat poop?”

Listen to Charles Mingus’s album, Mingus Ah Um on Spotify. For those of you who have Netflix, there are a few entertaining anecdotes about Charlie Mingus told by his friend Fran Lebowitz in the second episode of her limited series, Pretend It’s A City.